The whales had been breaching all morning and it was one of the most spectacular sites I have ever witnessed. Right in front of our boat a humpback broke the surface with all but the tail out, an incredible site watching this behemoth of the ocean powerfully but gracefully at ease it in its playground. As the boat manoeuvred off the coast of Eden in the Two Fold Bay area there was another behemoth on the horizon that kept catching my eye, Mt Imlay.

Right in front of our boat

Mt Imlay at 900m cuts an imposing figure on the southern New South Wales coast as it sits proudly within the Mt Imlay National Park. 387km from Sydney and 30 minutes from Eden, it is also accessible from Melbourne (7hrs) on the Princes Highway.

Named after the Imlay brothers who were pioneers of the district its Indigenous name is Balawan, making up one of the three sacred peaks on the Southern New South Wales coast. You could be forgiven for believing Mt Imlay was of volcanic origins when in fact the entire area is marine and the peak of an erosional form, capped by resistant sandstone.

That was October and I promised myself that I’d climb it, the dominance of it on the horizon as it stands as a sentry to all those at sea had drawn me in, but it wasn’t going to be this trip. Fast forward to February and a window opened up spend a few days on the coast with my brother and attempt the climb.

The night prior to the hike a storm rolled in lightening that lit up the night sky like it was day, thunder that shook the house and rain that didn’t abate for hours. All I could think about was how wet the mountain would be and was the rain going to stop!

The morning came and while overcast the rain had stopped, we figured the best time would be early afternoon and we were likely going to need to a 4WD vehicle to get to the trail head, thanks mum and dad.

The dirt road that leads to the trail head was surprisingly dry, one tree down that we were able to move and before long we had arrived at the car park, a small little picnic area, complete with tables, water tank, pit toilet and fire places. 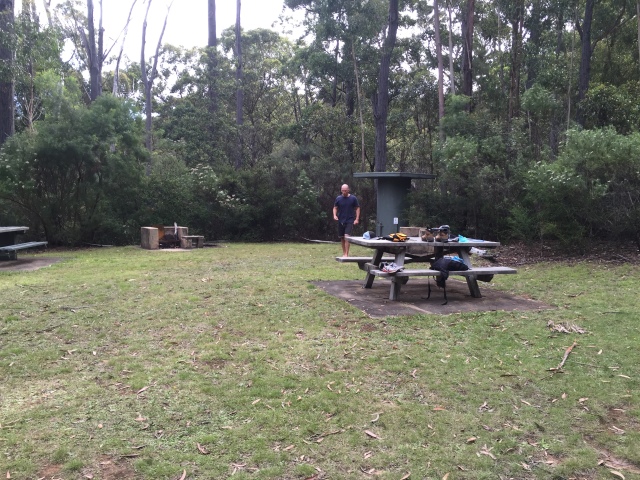 With the GPS on and Boots washed to guard against Cinnamon Fungus (Phytophthora cinnamomi) which is a microscopic, soil borne pathogen (disease causing organism) that attacks and destroys plant root systems causing plants to die through lack of water and nutrients (there is no known cure), the trail immediately climbs. Many bloggers have described the walk as steep and they were not exaggerating. Its 3 km’s to the top and the first ridge is reached at the 750m mark, already our heart rate is up. You cannot see Mt Imlay from here, we’re still just walking the ridges to the main event.

The tracks meanders over a saddle providing some respite before scouting the edge of the next ridge as it continues to climb, a few exposed areas but nothing to be concerned about.

Mt Imlay comes into view and the steepness of the final ascent is imposing, far steeper then what we have walked. The environment changes between the ridges as we move from the east windward side to the west lee side and it feels a little like an amphitheatre. Grass trees dominate the vegetation, some of them the largest I have seen in my travels. 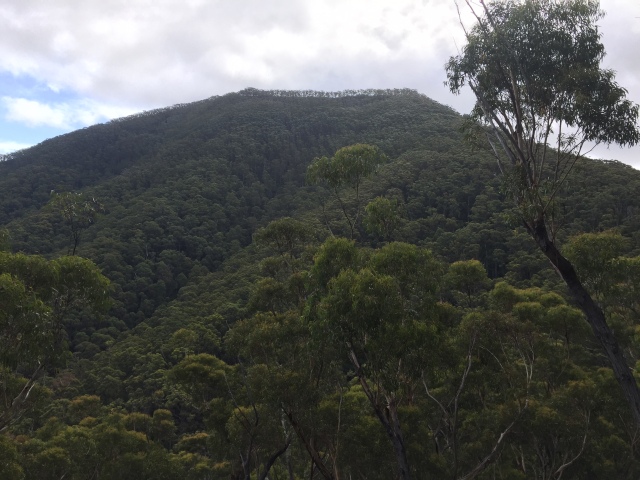 Through the Grass Trees 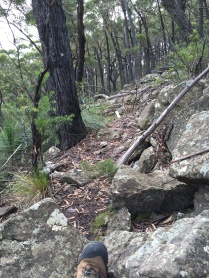 Known botanically as Xanthorrhoea, but if you grew up in the 1970 – 80’s you’d also know them as Blackboys, based on the purported similarity in appearance to that of an Aboriginal boy holding an upright spear, a name now relegated to the past.

All are perennials and most grow an above ground stem. The surface is rough and built from accumulated leaf-bases. Flowers are borne on a long spike above a bare section called a scape, the total length can be up to four metres long in some species.

Xanthorrhoea are very slow growers, generally 2½ cm per year. That would make our 1.5 metre tree about 600 years old, wow that is old!

Indigenous Australians make good use of the Xanthorrhoea. The flowering spike makes the perfect fishing spear. It is also soaked in water and the nectar from the flowers gives a sweet tasting drink. The resin from Xanthorrhoea plants is used in spear-making and is an invaluable adhesive for patching up leaky coolamons (water containers) and yidaki (didgeridoos). The dried flower stalk scape was also used to generate fire using the hand drill friction method.

A refuel break on the second saddle and its game on with the main slope. The mountain is unforgiving and it’s not long before we are in the thick of it, my legs screaming out to stop. I look to my right and the hill is so steep I feel if I turn around I’ll fall down it. While the ridge is fairly wide there is little in the way of switch backs. There is nothing particularly scary about this part of the walk it’s just unforgiving and forces those of us who are not uber fit to dig deep.

Several stops later, catching my breath and remaining hydrated I’m still on the ridge with no sign of the top, my much fitter brother is out of sight. It times like this I’m really motivated to lose weight and get fit, shame the feeling doesn’t last.

I’m spent and mentally fighting thoughts of turning around, but my desire to get to the top is stronger. I find a sturdy stick and with my new walking pole get a second wind. The trail steepens further and the rain the night before is making its presence felt turning the upper slope into a muddy mess and if I’m not careful it will become a slip and slide.

Dragging one foot in front of the other with the only sound in my ears the beating of my heart, I emerge out of the thick bush to a rock face that blocks our path to the top.

My brothers rested and the track from here is not immediately clear, it doesn’t help that water is draining down the rock face I suspect we have to climb. We quickly explore the area and agree the trickling waterfall is our route.

Onto the last ridge

Time for a rest

Just the rock climb ahead

I’m not in favour of climbing wet rock, I find dry rock challenging enough. Thankfully it’s not very high or exposed and there is the added bonus of a lot of tree roots to use as handholds.

While steep like the rest of the walk the little rock climb is fun before a quick scramble to the top. I’m looking for the much discussed aerial on top but there is no sign of it, we quickly realise there is more to walk.

Another ridge a lot shallower angle than those before winds out before us taking our direction from west to south west. It’s rocky and some call it a razor back but it doesn’t have the sheer exposed edges like I’ve experienced on other walks.

Following the ridge which is really a lot of rock hopping and scaring the many small lizards sunning themselves, there is a final climb to the top, nothing like the main  slope and there in front of us is a little aerial. I expect to see a Telstra tower many 10’s of meters in the sky but instead there is just a little non-descript aerial, its size betraying the importance of its job.

The Mt Imlay VHF Coastal Repeater Stations provide a vital link for shipping between Melbourne and Sydney with a sea range of a 120kms. The solar panels that power the repeater station look like they had suffered a beating you hope from hail and not people throwing rocks.

The peak is otherwise vegetated in scrubby trees and Boronia. The Mt Imlay Boronia (Boronia Imlayensis) is biologically important it is recorded as only growing on the sandstone ridge near the summit. A small shrub to 2m high with pinnate leaves and pink to white flowers, it is found in eucalypt woodland and we were blessed to see it in flower, surprising given its generally accepted it flowers between September and December.

At the top, unlike other peaks I’ve climbed there is a trig point cemented to a base which make a good seat for a rest and refresh. The view stretched from the Mallacoota in the South to Eden in the North, with Green Cape lighthouse clearly visible 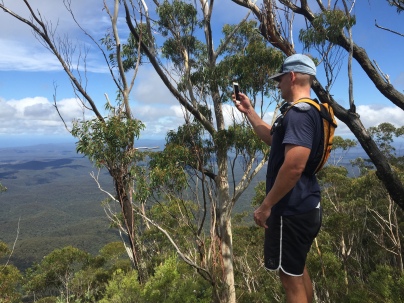 Views from the top

At the trig point

Views right down to Mallacoota

It’s not immediately obvious for all the shrubbery but stepping off the path towards the edge reveals just how high and how sheer the drop is if you were to push your way through it. The breeze refreshes us and my new Columbia shirt dries in no time.

It take us just on an hour to get here, we think we can do better going down. Back at the car park we’re down in 45 minutes after some careful descending over the steepest part and a jog down the lower slopes. I’ve found jogging eases the jolting on my knees where it is safe to do it. The risk is always that you will pick up speed and you know what they say, “prides comes before a fall” thankfully it didn’t happen on this walk 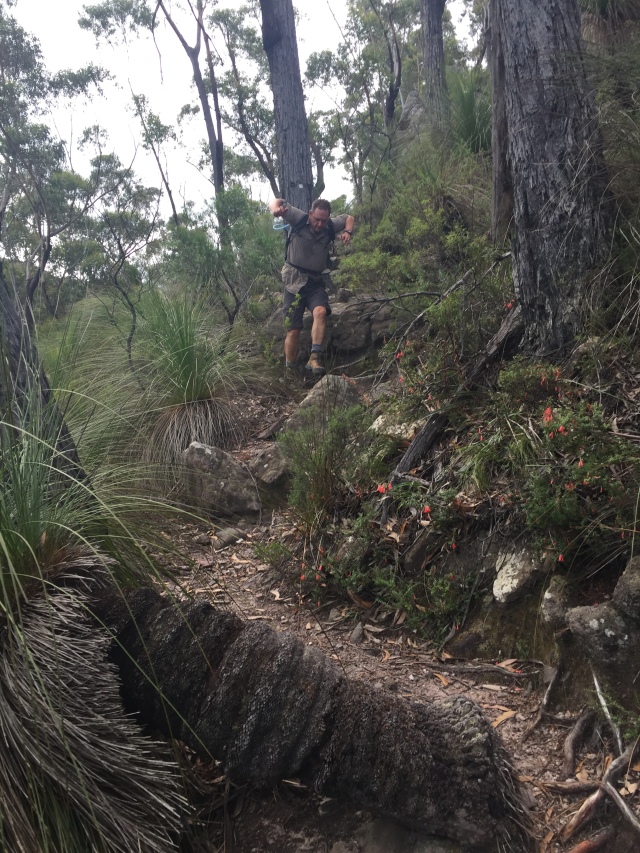 Camping – There is no camping in the park. Day trippers can picnic at the trail head

Water source – There is a tank at the trail which is seasonal and holds non potable water. You should bring sufficient drinking  water for your entire trip.

One thought on “Mt Imlay, slippery when wet”

Majestic views from the summit of Cradle Mountain, totally calm on top as the wind whipped up and over us #cradlemountain
Love love loved waking the cradle mountain summit, just before this blew in so peaceful and surene
Amazing morning swimming with whales off the Sunshine Coast, could not believe how big the mother was passing under us.
Beautiful skiing an Falls Creek this past weekend, so good to get back on the slopes
Moody weather with cloud building over my bogong, calm before the storm
With the annual moult inevitable the rays are getting excited for a feast of spider crabs. The big pile up has dispersed as the crabs voraciously feed on the walls and pylons
%d bloggers like this: