In my mid teens I had a series of accidents on pushbikes that resulted in broken legs and an arduous recovery of which I would not want to repeat. It built a fear of falling striking back to the pain suffered in the accidents and associated recovery. As a result exposed heights and even the thought of them bring on sweaty palms and the chills.

It hasn’t stopped me doing many of the walks I love, but it has started to constrain me from adventuring into some of the more stunning (read mountainous) areas waiting to be explored, one of them being Sugarloaf in the Cathedral Ranges

In the late autumn of 2012, Chris a colleague from work on secondment from America and I decided a day walk up Sugarloaf Peak, across the razorback to Cathedral Peak and down Neds Gully, a good opportunity for him to experience some of Australia’s back country and wildlife during his stay. But it would require me to face into the fear of exposed heights

The cathedral range is a spectacular seven kilometre ridge of sharply upturned sedimentary rock in the Acheron valley, about 130km or 2.5 hours’ drive from Melbourne. There are a variety of walking tracks ranging in difficulty from easy to challenging that offer the opportunity to explore the park’s main features, climb the peaks and enjoy the amazing views. There are two “walk-in” camp sites, Ned’s Gully near Little River and Farmyard found on top of the range as well as one “drive-in” site, Cooks Mill, also near Little River. Walking, rock climbing, bird watching and fishing are all popular activities that can be enjoyed in the park.

Covering the early incline on the dirt trail up Canyon track was easy enough and even through the small canyon was doable. However it opens onto an exposed ledge with a steep incline for about 10 meters, before switching back to the west side of the range and flatter ground.

Chris scrambled through like a mountain goat, not unexpected for someone who has climbed a number of peaks in Alaska. For me this was getting the heart racing it was tough to put out of my mind the images of me falling to into a painful mess at the bottom and more embarrassingly needing airlifting out, what’s more the rock was just moist enough to feel slippery.

I gingerly took a step out of the canyon and onto the exposed rock, legs shaking it was taking all my energy to keep my mind under control. I felt like I was slipping (I don’t know if I was really was) and in that moment I convinced myself this was too dangerous and what an impact a slip would be on my job and family.

I called out to Chris and the walk was over. Embarrassed and disappointed but happy to be in one piece I suggested we take a different route and explore Cathedral Peak instead.

The easiest alternate route to Cathedral Peak is Ned’s Gully it starts just behind the camp ground of the same name and follows a ridge to Ned’s Saddle, a gentle but persistent incline, before climbing steeply to the ridge while remaining in the trees.

There is a nice little side walk on the Saddle to Ned’s peak rewarded with great view back towards Sugarloaf and pretty much caters to all abilities.

On the ridge it is a short walk through trees before the track opens on the exposed Cathedral Peak and the trail that leads down to Farmyard, the only ridgeline campground and onto Sugarloaf.

While Cathedral Peak is not as tall as Sugarloaf peak the views are spectacular and it makes a great lunch spot as well as a place to take those photos that make you look like you’re standing on the precipice when you’re not. Even doing that gives me sweaty palms and causes me to tense up. I’ve got some way to go in conquering this fear. 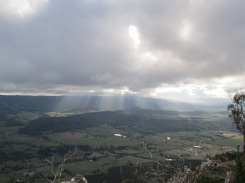 Views of the Acheron Valley 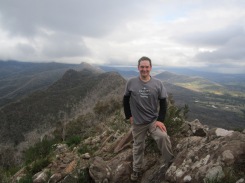 We descend via the same track impressed with the view up top but disappointed in the lack of wildlife.

As we clear the forest and enter the campground, something catches my eye in the bush, it’s a Lyrebird, a male with the long ornate tail plumage. He is not dancing or singing, but still a great sighting. Lyrebirds are common in the area and the ridgeline camp ground, Farmyard was so named after people heard the Lyrebird mimic the sound of the farm animals in the Acheron Valley below. Lyrebirds are renowned for mimicking the sounds of their environment, natural and industrial.

I’d love Chris to see Kangaroo’s and wombats so I pray quietly that we might still have the opportunity. Back in the car we leave Ned’s Gully in the dust of the setting sun and clear the forested area, breaking into open grass fields. Look, there, I yell, a kangaroo, and another and another, 20 in all, feeding and then suddenly bounding through the paddock like something had scared them, what a site!

The main road murmured under the ties the familiar drone of long stretches as we inched closer to the Black Spur  and the Great Dividing Range which separates the coast from the inland, running from Victoria, through New South Wales and into Queensland.

In darkness we follow the curves of the road, like a black carpet rolling out before us. On a corner and in a cut out the headlights catch sight of a brown lump, is it is that a Wombat? It is, I brake and pull over. It’s a wombat and it’s alive! Chris is impressed and I thank God for our animal encounters, Ask and you will receive I am reminded.

Camping – There are three camp grounds throughout the park and a day area at Sugarloaf Saddle, with pit toilets and an expansive shelter as well as non drinkable water if the tank is full.

Neds Gully campground is a walk-in site just off Little River, it’s a nice grassy site that backs on to the range with pit toilets at the car park.

Farmyard campground is located between North and South Jawbone Peaks on the ridge. It’s walk in only and can be access from the ridge tracks either from Sugarloaf or Cathedral Peak. Alternatively it can be reached via the Jawbone Creek track, the easiest and most direct route.

Cooks Mill. This is the largest of the sites and is drive in, set by Little River it’s ideal for families wanting to spend time by the water and is only a short walk from the start of Jawbone Creek track for the more adventurous. The sites are reasonably non-descript with centrally located pit toilets.

Water source – Little River runs close by Ned’s Gully and Cook Mill campgrounds. You should bring sufficient drinking and use river water for non-drinking activities. Should you need to drink the river water ensure it is appropriately treated.

Farmyard has no permanent source of water and Jawbone creek cannot be relied on. You need to ensure all water you require is brought in with you. After heavy rains there is a spring from the rock about two thirds of the way up the Jawbone Creek track that may provide sufficient water.

Amazing morning swimming with whales off the Sunshine Coast, could not believe how big the mother was passing under us.
Beautiful skiing an Falls Creek this past weekend, so good to get back on the slopes
Moody weather with cloud building over my bogong, calm before the storm
With the annual moult inevitable the rays are getting excited for a feast of spider crabs. The big pile up has dispersed as the crabs voraciously feed on the walls and pylons
Every year around this time the spider crabs migrate from the depths into the shallows to moult. They come in their thousands, a meter or more deep. This is the initial gathering, with moulting yet to happen
Beautiful Lamington National Park and the Ships Stern circuit, a far cry from the rock scrambling of Mt Barney. #lamingtonnationalpark
%d bloggers like this: