Day 1 I wrote about the journey from Telegraph Saddle to Roaring Meg creek, you can read about it here, Wilsons Prom, a bucket list destination .

Day 2 I wrote about our experiencing the lighthouse and walking to Little Waterloo Bay, you can read about it here, Wilsons Prom, lighting up history

A sigh of relief washed over us when looking at the map we learned that the high steep mountain we spotted the day before was not on our route and was not in fact Kersops Peak, but Mt Wilson.  In any multi day walk, there is a flat day, either weather, spirits or fatigue knock you about. The walk to refuge cover is short just 6km, we had planned to walk through to Sealers but all the sites were booked. I was thankful for that, as this was shaping up to be my  flat day, my muscles protesting the idea of moving at all.

Walking out of the little bay the undulating gullies and ridges present themselves again, another beach crossing and then we’re heading for Kersop’s peak cutting off an enormous headland where no trails lead. My legs are screaming to rest and while the pacing technique I’m using on this walk, consistent regardless of terrain has saved my knees and not exhausted me, mentally I’m just not here. Claire had her flat day on the walk from the lighthouse, with me encouraging her to keep going and now it was her turn to do the same. A kilometre seemed like several and by the time we reached the turn off to Kersops Peak, I felt like I had walked a marathon.

We’d been warned about the super clever crows at this spot, as it’s tempting to walk the peak and back, a little under 2km without your pack. Having seen the crows in action earlier the day before we choose to keep our packs on, although on our return we found many didn’t. Kersops Peak has sweeping vistas from Refuge cover in the north, across the ocean, lighthouse and Waterloo Bay and makes a great place to take photos of the surrounding landscape. We stop for lunch here and other than the cooling wind getting a bit chilly under overcast skies its great respite.

The track meanders for what seems an eternity into Refuge Cove. Wishing it had just crossed the valley it’s clear why that would not be possible as you round the final headland and lay eyes on its deep blue sapphire waters. It’s with some shock we realise that this would be better renamed party cover. Of all the southern coast this is the only safe anchorage, it wasn’t called refuge cover for nothing! It’s not that we didn’t know this, but the numbers of boats surprised us, by sunset we had counted 30.

The beach is slightly longer than Little Waterloo Bay with camp grounds at both ends. Hiker on the southern and boaters on the northern, a wise move given the very different cultures we come to appreciate later in the night. The hikers camp ground is a large open and unstructured site with a few tables randomly dotted about, a composting toilet and of course running water, safe to drink after being treated. A few of the sites face onto the little tidal inlet, their view giving up the flat ground advantage of other spots. 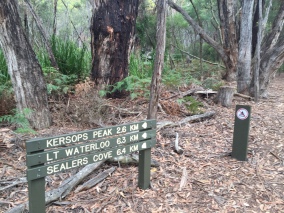 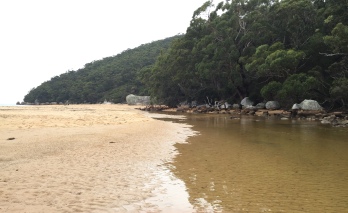 Views of the inlet 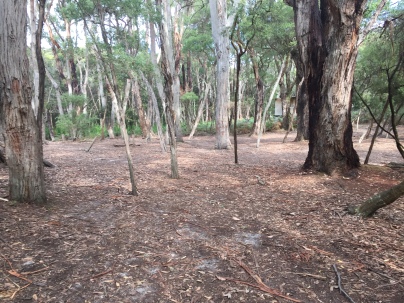 At the north end is the boaters camp, much small and unstructured it is a flattish area almost right on the beach and is the habitat of the small boaters, those that don’t have the luxury of sleeping on their motor cruiser or yacht. The boaters camp is distinguished by what can only be described as the boaters wall of fame, where over the decades people have either scrawled the name of their boat in the wooden planked wall or more fittingly attached a plaque.

Separating the two camp grounds is the rangers hut complete with table and chairs and another toilet block. This is the best amenitised beach on the coast. While closed when we were there, I can imagine this is a busy place in summer both with the never ending parade of hikers moving in both directions and the swathe of boaters seeking a refuge and more importantly a great time away and place to party. There were a number of shutters on the rangers hut suggesting that they might even sell basic needs products and snacks, it’s possible given the ability to boat items into the location.

A surprising find at the hut is a number of perfectly bowed pieces of timber or are they, on closer inspection we conclude they are whale bones and later find more of them at the boaters wall of fame. Following the discovery of the cove by  Captain Thomas Wishart in 1837, whaling began in the late 1830’s, with a station being built in 1841 . Boiling down works persisted until 1845 by which time the population had been decimated and too scarce to continue a viable commercial operation. From 1859 to 1863 granite quarrying took place on the eastern side of the bay and a temporary wharf and worker’s residences were established. Natural resource exploitation also included timber harvesting (1828-1858) and commercial fishing in the nineteenth and twentieth centuries.During the Second World War, the area was a commando training centre and outstation.

With the lay of the land figured out, site selected and tent up, it was time to meet our only neighbour at this still early our of the day. Darren’s an avid hiker having experienced many of the environments in Victoria and it was a pleasure to share stories, it’s one of the most enjoyable experiences of hiking, meeting like minded people that enjoy the outdoors as much as we do!

The quiet lapping of the ocean in the cove was beckoning us to swim, clouds were gathering overhead in a threatening manner and now seemed as good a time as any to take a plunge. The water was colder than I remember it at Little Waterloo, or maybe I had just cooled off today. Either way I waded in as the water consumed me like a hungry liquid figure, a final dunk under and a shriek, the cold shock ricocheting through my body and I was in. To my disappointment the water was murky and for snorkelling it was like swimming in a thin soup. I traverse to the other end of the beach but things were no better there. Returning to my original spot I make the best of it, spotting a few fish but nothing of great excitement to point my underwater camera at. Had it been clear I might have spotted the collection whale bones that is believed to rest on the bottom about 50m off the beach in front of the steps!

In for a swim

Boats & BBQ’s on the water

Far more interesting was the people watching, care free hiking groups unburdened of their packs, ever the explorers rock hopping the headland. The young and free adults jumping off the rocks. Families with their young kids wading in the shallows, their lives unguilded by responsibility and fear, innocently and oblivious to all others, engrossed in sand castles and lapping waves, while parents watched on with eagle eyes for their safety. There were the quintessential bogan boaties, beer in hand, louder than life enjoying mateship and regaling fishing stories, no doubt about the one that got away, it was this big!
And most interesting of all, the well to do grey sailors, rowing back and forward from their luxury yachts to the beach. Their tipple of champagne and fine wine in hand as they toasted another great day sailing. I could imagine them regaling stories of their life long friendships, career success, big boats, life seemed so perfect for them. Who knows maybe it was a friends, or they hired them or they really were well off, good for them.

In what a day or two ago was experienced as a remote outpost was now one of the most eclectic groupings of people I have ever seen in a place that you would least expect.
The threatening cloud hung over dinner but that’s all they did, threaten. Following dinner we made our way back up the trail we’d come in on to a spot we noted earlier would be a great lookout over the cove. The sun was due to set over the mountains which would be cool but the real spectacle would be the more then 30 boats lit up on the water.

The reds and greens and white lit the water like it was Christmas tree and flashed me back to a time in my childhood where I had been sailing on my uncles boat and later that evening at Coal and Candle Creek we went and looked out over the water, watching all the boats bobbing safely in the little harbour, their light twinkling like Christmas.

In my younger years I was into sail racing in the Northern Territory competitions, we learnt about port and starboard, left and right red and green. I was reminded of the saying we used to learn it” A little Red Port Left” and share this with Claire.

Making our way back to camp down the rocky granite outcrop in the black of night, star hidden behind a curtain of stubborn cloud, Claire comments that she cannot really see where she is going, but she’s just following my footsteps. I think of what she has just said and has profoundly captured the essence of the Christian life. One of being like Christ, following in his footsteps and casting our burdens on him.

Camp was now quite full and even with a few large groups was still pretty good on the noise front, what could be heard from the end of the beach was the boaters camp, no surprises their I guess, we were seeking two very different experiences in the same location, that is always a parks management challenge. Thankfully for me I hike with ear plugs, which has avoid many a difficult conversation without having to tolerate the desires of others unabated.